There are a couple of motorcycles I regret selling or trading in for something else. One was because of youthful exuberance, the other, well I still am not quite sure why. The youthful exuberance was trading in my BSA Lightning 650 for a Kawasaki H2 750. The fastest thing on two wheels. When you’re twenty years old, you chuck the old mans bike and go for pure speed. Now, don’t get me wrong, I loved my H2 for a lot of years, but today I wish I still had them both.
The Lightning was temperamental, leaked oil and the electrics were, well…there is a reason why Lucas Electrics were called the ‘Prince of Darkness’ and the joke “why to the English drink warm beer? Because Lucas makes the refrigerators…” 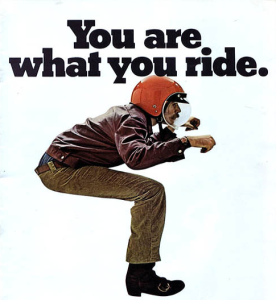 Ok, there were lots of things you could do to deal with the electric issues, the marking it’s territory…oil leaks…not so much. None of that really mattered. The British Twins… BSA, Triumph Norton and others have a certain ‘Soul’. I can’t explain it. Maybe it’s because my formative years were spent on Brit Bikes and I know deep down what they feel like….for better and worse. The Germans, a little (?) sterile, the Italians, maybe a touch too macho and the Americans…just plain old King Kong pound your chest brash. I love them all, but my heart and soul still say “God save the Queen” And then I ride off on my Triumph.
BSA basically designed the Thunderbolt as a ‘Touring’ model. Compared to the Lightning the Thunderbolt was rather tame but in truth that was really a good thing. A little more relaxed steering, a more comfortable seating position, and a longer kick start lever (which made starting the bike easier) made the bike really quite comfortable. But, the real differences were in the engine itself.

Take some of the performance aspects of the Lightning (the cams) and then simplify it with a single carburetor. smoother acceleration, lower maintenance (dialing in one carb is a lot easier than balancing and tuning 2!). But really, the single carb made the Thunderbolt a really easy motorcycle to ride. Plenty of power for it’s time, great handling what more could you ask for?? Well, that’s where it all falls apart.
Enter the Honda CB750. Twenty more horsepower, better braking (thanks to a disc on the front vs. the single sided drum off the older BSA Gold Star 500), electric starter…the list goes on. The Japanese manufacturers were here and way ahead of everyone else.
But still…the CB750 with all it’s attributes can’t match the soul stirring feeling of a British Twin. Bikes that move with just a thought, motorbikes that feel the road underneath you, a motor that gives you just enough vibration to let you know that it is alive. A BSA 650 is a bike that demands attention. Over the years there has been a running joke that if you ride a British twin for one hour, you have to work on it for two. It’s not true…but not too far off. But the time is well worth it
For most all of us that want a classic British motorbike, a Thunderbolt is a great choice. I really like the single carb..smoother power delivery than the twin carbs, a little less vibration but still that great feeling that a classic bike gives you.
I found a really nice one on ebay today. A 1971 that is not all original but is a runner according to the seller, looks good and the price is not too out of line in the real world. The Thunderbolt is a great bike…much easier to own than the Lightning of my youth.
Click on the pics below for more info and more pics